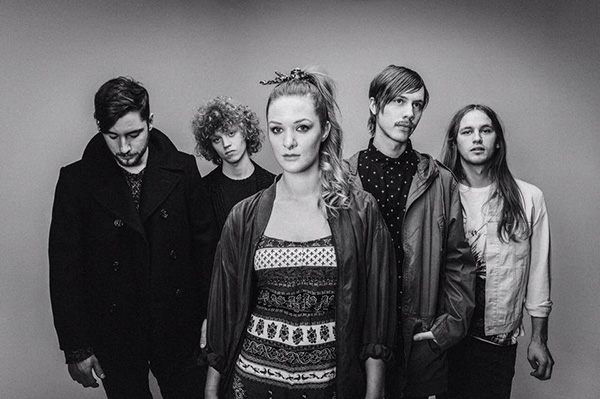 Sweden's Last Lynx have been quietly turning the dial up to 11. After an auspicious start — their first track 'Killing Switch' found its way to #1 on the Hype Machine just days after release — the band cemented their early promise with the EPs Alaska (2011) and Ocean Reels (2013). Their most recent single, 'Curtains', was released a couple of weeks ago and has already raced past 150,000 listens on Soundcloud, and August will see them take to the stage in London Town on two consecutive days: they play Hoxton Bar & Kitchen on August 1st and at Kopparberg's Urban Forest event on August 2nd. Musos' Guide caught up with Camilla Dahlstedt, the band's keyboard and percussion playing co-lead singer, to find out a little bit more about the band.

MG: I suppose, considering this is your debut on Musos' Guide, I've got to start with the most predictable question. Can you introduce the various band members to our readers, and tell us a little bit more about your roles in the band?

We're a five piece; Robin Eveborn, Kim Lindqvist, Marcus Lindblom, Fredric Lindblom and me (Camilla).
Robin is the producer, one of the lead singers, plays keyboard, synthesizers, etc.
Kim plays bass guitar, Marcus electric guitar, Fredric plays the drums and also writes a lot of the lyrics.
I am the other lead singer, play keyboard and percussion.

MG: The band only formed relatively recently [in 2011]. Can you tell us a little bit about how you guys got together?

We're all from the same suburb right outside of Stockholm and some of us played together in bands before; Fredric and Marcus played music together since they were youngsters - I've played in bands with them as well and Robin and Kim have played music together before. Last Lynx started with Robin, Marcus and Fredric wanting to write together, so they played around in the studio making hip hop beats and then they wanted me to try some vocal stuff, I think it started with only the word "alaskaaa..", we just continued to try more stuff and eventually I sang on several of the tracks as a featured artist. We released that ourselves as the Alaska EP which was received very well in the blogosphere and live requests started to land in our inbox so we were psyched and just thought - well then, let's start a band! And since Kim and Robin have known each other for a long time and played music together before, he was a natural choice as a bass player.

MG: You’re signed to SoFo Records, and the fact that Universal has its own Swedish division says a lot about what an awesome music industry is flourishing in your country. Is there anything in particular that makes Sweden such a great place to be a musician — do you think you’re more free creatively, for instance, because you’re away a little bit from the more glossy, processed music industries of the USA and UK?

The thing is, I haven't really practiced music on a daily basis anywhere else than Sweden, I've visited but it's not the same thing as living it. So it's hard to answer when you haven't really seen it from the outside. But the fact that I haven't thought about it maybe answers your question, we're very free creatively. But I/we can't speak for everyone. There are probably Swedish musicians stuck in shitty deals which limits them creatively and forces them to release stuff they're not proud of. But the music industry isn't big in Sweden but it's also a small country so most people involved in it know - or know of each other - so I don't think there is much room to be an asshole. And I believe the best songs come from musicians who haven't been limited by a certain frame or musical ideal.

MG: Your sound is really cool – and very distinctive. Where other bands at the moment make you think of bands from the past (like the whole scuzzy '90s thing), I think your sound is really fresh. Did you guys have a very specific idea of how you wanted the band to sound, and are there any particular bands / artists that have influenced or inspired you?

Thanks! A part of it is that we come from different music backgrounds. I sang mostly jazz and soul, Robin and Kim have played/written everything from metal to electronic music and Fredric and Marcus have played indie rock/-pop music. But from the beginning Robin, Marcus and Fredric wanted to keep it as a studio project with featuring artists. Initially they wanted to make hip hop, or at least hip hop beats but it melted down to pop with a feeling of hip hop. The real key to our sound is that Robin is our producer, so our demos often have a "Last Lynx"-sound from the first draft.

MG: What’s your writing process like? I read in an interview elsewhere that ‘Lacuna’ started with a bass line and came together really quickly - is there a particular song-writing method that you guys share?

There is no specific method but often Robin or Marcus comes up with an idea in the studio that someone else picks up on. Sometimes we jam at the rehearsal place and then take it to the studio or the other way around. Then we take it back and forth until we're satisfied.

MG: You recently announced gigs in London at the start of August — what have your experiences on the road been like so far, and do you have any plans for a longer UK tour?

We love playing live and our gigs in UK so far have been awesome, so yeah we would love to come for a longer tour, but nothing is set in stone yet.

MG: Can you tell us a little bit more about your upcoming EP Rifts? Is it shaping up to be very much the big brother, sound-wise, of Alaska and Ocean Reels, and can you give us any hints about the release date?

I think all of our EP's have the same sound atmosphere, that's the basis for all of our songs, much thanks to Robin who produces. The biggest difference between Alaska and the later two is that some of the songs were written in the rehearsal space, while Alaska was entirely written in the studio. The Rifts EP is our third release and I think we've grown closer as a band and become better songwriters, which I hope shows. We don't have an exact release date yet, but it'll be late summer/early autumn.

MG: Finally, what does the rest of the year have in store for you? Will you be hitting the studio again as the nights get longer, or are you out on the road?

We're gonna play live as much as possible and work on new stuff any time we get the chance to!